Birth of the Buddha

The man who was to become the Buddha (Awakened One) was born in 563 BCE, as the prince of a small kingdom near what is now the Nepal-India border. He was named Siddhartha (Aim Attained), and not long after giving birth his mother Queen Maya died, leaving the father King Suddhodana a widower.  At this tragic time, the newborn’s aunt Mahapajapati stepped in to help raise the boy.

Growing up in the royal city of Kapilavastu, Siddhartha was watched closely by his father, who was afraid that his son would one day leave the palace to become a holy man. This had been foretold by a respected sage not long after the prince’s birth, and the king was determined to prevent this from happening. So he made sure that the prince would never want for anything, and kept all that might cause distress away from the eyes of Siddhartha.  The finest teachers were provided, including martial arts instructors whose role was to train the young prince for a time when he would become a warlord like his father.  At the age of 16, Siddhartha was married to a beautiful young woman named Yashodhara.   But instead of happily settling down, the prince carried within himself a vague sense of dissatisfaction that wouldn’t go away.

Not long after, Siddhartha happened to see someone suffering from a serious illness, and when told that all people are subject to illness he was surprised and confused.  Then the same thing happened one day when he saw a very old person; and a dead body being carried away for cremation.  He now realized what were later to be called the Four Insights: that birth, illness, old age, and death are inescapable.  Finally, Siddhartha saw a holy man walk by, and was impressed by his aura of peacefulness and equanimity.

These experiences had a profound affect on Siddhartha, and despite possessing wealth, intelligence, health, good looks, and a beautiful wife who had just given birth to a baby boy, he was deeply dissatisfied.  As an indication of his unhappiness, Siddhartha named his son Rahula (Fetter).

If a life of luxury couldn’t free him from the nagging feelings of dissatisfaction, Siddhartha thought, then maybe living as an ascetic holy man would.  So the prince made up his mind to leave the palace, and ordered his charioteer Channa to saddle a horse, and after taking one last look at his sleeping wife and child, he slipped past the guards whom his father had posted to prevent him from leaving.  Thus, at the age of 29 Siddhartha began his spiritual journey as a seeker of Truth.  But before saying goodbye to his faithful charioteer, Siddhartha gave Channa his horse, and a jewel to present to his father, wife, and foster mother, along with a message that he was going out into the world to seek a way to cut off the roots of desire, which is the cause of suffering.

Siddhartha walked south, where he encountered the wisest spiritual teachers of the time, who allowed him to study with them.  He soon mastered various methods of meditation, and was offered the chance to become a teacher himself.  But Siddhartha realized that he was still no closer to his original spiritual goal, and declined the offer.

He continued on his journey, joining up with a group of five fellow ascetics, who were  practitioners of the arts of self-mortification.  They lived on the banks of the Nairanjana River, and such were the spiritual attainments of Siddhartha that they all regarded him as their teacher.  Some of their practices included holding the breath for long periods of time, and burying themselves in earth up to their necks.  But after Siddhartha nearly fasted to death, he looked at his emaciated body, and thought to himself that the path to enlightenment must lie between the extremes of materialism and asceticism.  So after six years of study and practice, Siddhartha left his companions to follow this new found middle way to enlightenment. 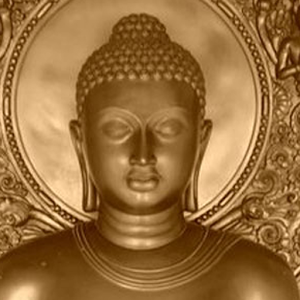 Siddhartha recovered his strength, and made the journey to a deer park near Benares, the modern-day city of Varanasi,  and on a full moon night in May, he sat beneath the branches of what is now known as the Bodhi Tree, vowing not to rise again until finding the ultimate truth, or die trying.  So he settled into meditation, gradually going into a deep, luminous and tranquil state.  Using the extraordinary clarity of such a mind, he confronted his own created illusions, in the form of Lord Mara who sent various apparitions: demons, beautiful women, terrible armies…  representing desires, fears, and aversion.  But Siddhartha remained unmoved, seeing through illusion itself, and continued on to see his former lives, gaining knowledge of birth and death. He cast off ignorance the cause of all his rebirths, eliminated the last vestiges of karma for all time, and acquired an unshakable peace.

He saw that the experience of all sentient beings is shaped by three qualities, namely Anicca (Impermanence), Dukkha (Dissatisfaction), and Anatta (No-self or Selflessness). His core teachings were to become known as the Four Noble Truths:

Having realized the goal of Perfect Enlightenment, Siddhartha became a Buddha (Awakened One) at the age of 35, and spent the next 45 years teaching a path which, when followed diligently, would take anyone regardless of race, gender, or status to the same Perfect Enlightenment.