In 2006 a small group, made up mostly of Vajrayana Buddhist practitioners living in north west Tasmania, began to meet and practice at the home of Sangye Dorje, a former Rabjung Monk of the Rechung Kagyu lineage of Tibetan Buddhism.

By 2009 the group, under the guidance of Sangye Dorje, had developed a more inclusive, non-sectarian outlook, exploring the richness of the world of Buddhism.

In 2011, the Buddha-Heart Fellowship was born, the name chosen so as to be a constant reminder of the potential for Awakening to the True Self that is within all sentient beings, and reflecting the inclusive attitude of our members. Buddha-Heart, the Awakened Heart/Mind of Compassion and Wisdom, which is Buddhahood. 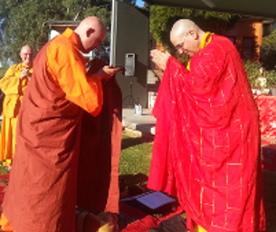 2013 saw some major changes.  The Buddha-Heart Fellowship became affiliated with CloudWater Zendo, the Zen Centre of Cleveland, Ohio, USA; and Resident Teacher Venerable Sangye Dorje was ordained as a Ch’an (Zen) Monk of the Nien-Fo Ch’an Order  by Venerable Shih Ying-Fa, Abbot of CloudWater Zendo.  Sangye Dorje was given the Dharma name “Shih Jingang” (meaning Vajra Disciple of Shakyamuni Buddha).  Accordingly the Buddha-Heart Fellowship changed its emphasis to Nien-Fo Ch’an, which are the unified teachings of Ch’an and Pure Land Buddhism, while still remaining dedicated to the ideals of inclusiveness, and community service.

Donations of three standing Buddha statues and other items for our Altar were made by Nga and Vinh Duong and other members of the Vietnamese-Australian Buddhist community, including their relatives in the USA.  We received a Buddha Shakyamuni statue, and other items from our late dharma sister Etty “Peaceful Heart” De Graaff.  More Buddha statues and other forms of donations were made by David Melhuish and Pauline Clayton.  Books were also donated to help students interested in Buddhism.

On September 7, 2019, in a Transmission ceremony held at CloudWater Zendo, Cleveland, Ohio, USA, Ven. Shih Jingang was presented with the robes of an Abbot and proclaimed to be a 49th Generation Dharma Heir of the Linji sect of Ch’an Buddhism by Ven. Shih Ying-Fa, Abbot of CloudWater Zendo and Head of the Nien-Fo Ch’an Order. A great honour and blessing.

On January of 2020, Ven. Jingang relocated to the Greater Hobart area of southern Tasmania, and was asked to take on the role of being Spiritual Director of the Awakened Heart Community of Tasmania. This group has two main aims: to support Ven. Jingang and his work, and also beings in the community in vulnerable situations.

On September 4th, 2021, Sifu moved to the Southern Midlands town of Bothwell, after accepting a request made by members of the Vietnamese-Australian Buddhist community to be the founding Abbot of Duc Son Buddhist Temple in Bothwell.

Ven. Jingang continues to work, as he has done for many years, for the benefit of Buddhists and the wider community.  He served 15 years as a Retained Volunteer Firefighter with the Tasmania Fire Service; regularly teaches classes, and has years of experience leading retreats in Tasmania, interstate and overseas.  As a CPE-trained Chaplain, Hospital and Palliative Spiritual Care is also part of Sifu’s work; as is officiating at Funerals and Memorials.  He is often asked to give talks to schools, community groups and professional bodies.  Sifu is also a co-patron of Buddhists Engaged With Emergency Services (BEWES).

Our supporters and friends are united in a common purpose, to work and practice for the benefit of all suffering sentient beings.  Without the continued help of named and anonymous patrons our community work would not be sustainable. Nine bows to all.

May the Dharma continue to prosper, and may all beings be liberated from Samsaric suffering.

Buddha is Name, Name is Buddha, the Awakened Heart our True Home.